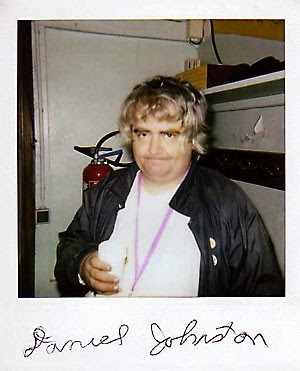 Sometimes Netflix feels like a blessing and a curse. The convenience is a blessing for sure. There is certainly something to be said for being able to lie in bed and order up a film on the same laptop I watch 'em on. The draw back is that then I have to watch them and not leave them laying around the house forever negating any savings I might gain from the lack of late fees. In this way they become something of a chore.

Last night I finally crossed The Devil and Daniel Johnston of my list, a film that has been sitting on my nightstand for over a month along with Volver:( It was super good. I really didn't know what to expect. I had heard sorta mixed things although I guess that's true of a lot of flicks. It was pretty crazy. I already knew some things like the river story in Austin but I didn't know about the plane crash or the "exorcism." The other interesting part - I thought - was that OMF and I saw DJ in Austin at the same South By that's featured in the film. It was a really great show. I don't remember what we cut away from the rest of our group for that night but I remember thinking it was one of the best things I saw that week and one of those shows that stick with you forever. Afterwards we took a walk to the capital grounds and hung out in the park for awhile. It was really sweet.

I'm not really sure what I got comin' now. The blessing and the curse continues.
Posted by Liv Moe at 9:46 PM